With three best friends, a troubling past, and hurtful secrets, Girls Night Out by Liz Fenton and Lisa Steinke delivers an interesting take on what friendship should, and shouldn’t be. 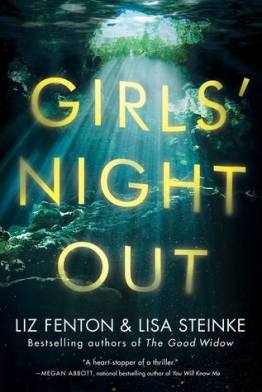 For estranged friends Ashley, Natalie, and Lauren, it’s time to heal the old wounds between them. Where better to repair those severed ties than on a girls’ getaway to the beautiful paradise of Tulum, Mexico? But even after they’re reunited, no one is being completely honest about the past or the secrets they’re hiding. When Ashley disappears on their girls’ night out, Natalie and Lauren have to try to piece together their hazy memories to figure out what could have happened to her, while also reconciling their feelings of guilt over their last moments together.

Was Ashley with the man she’d met only days before? Did she pack up and leave? Was she kidnapped? Or worse—could Natalie or Lauren have snapped under the weight of her own lies? (goodreads.ca)

The book starts off in an intriguing way, and had me wanting to keep turning the page to see what would happen next. Each chapter was either before Ashley went missing, or after, and showcased the little details that would foreshadow the main plot of the book, and had each character give their own perspective. As the book continued on, you start to learn about why Ashley, Lauren and Natalie slowly began to drift away from each other, and why suddenly Ashley wanted them to come back together as friends.

But – by the time I reached the middle of the book, I began to find myself a little bit irritated at the three main characters. These three women were middle aged, married mothers, and rather than being somewhat mature regarding the problems in their friendship, they just really acted like young girls in high school. Although each of the characters have gone through terrible things, everything they said or done was childish, and unrealistic in a way. There wasn’t a sense of realism in these characters, but rather, it seemed that these characters prefered to drown themselves in drama and self pity. None of these characters had a speck of empathy for their friends, and just continued to fight with each other, and all those around them.

The plot was very interesting, and the premise of the entire book had me excited to finish the story and see how the mystery unravelled. But unfortunately, the characters ruin the book. The three women did not grow as the story progressed, they remained flat through the whole book. I had high hopes for this book, but unfortunately found it disappointing.

Overall, I’d give this read a 5/10 stars. It had a great plot, and at times, a great dialogue between characters, but, the character development and just overall characters within the book were frustrating and childish.